GIVE TODAY
The male seahorse carries fertilized eggs in his "brood pouch" for 9 to 45 days until the young seahorses emerge fully formed. 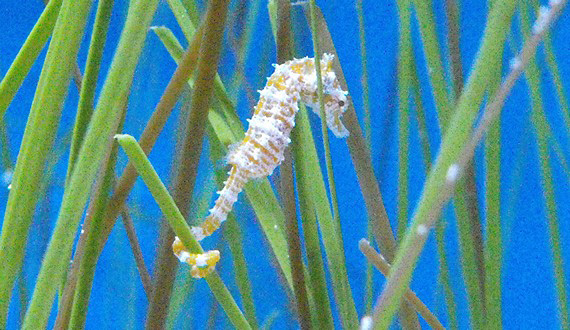 With adults only about an inch tall, the dwarf seahorse is the smallest of the four seahorse species found in U.S. waters. This dainty, curly-tailed fish occurs only in shallow seagrass areas in the Gulf of Mexico, along the Atlantic Coast of Florida and in the Caribbean. Unfortunately, this seahorse now faces numerous threats to its existence, and the best available science shows that it's in decline. Widespread loss of the species' seagrass habitat due to pollution, damage from boats and trawls and global warming is hurting the minuscule creature — which is further endangered by collection for use in the aquarium trade, as curios, and for prepackaged traditional medicines. After the catastrophic 2010 Gulf of Mexico oil spill degraded much of its range, this seahorse is more threatened than ever and could disappear forever without the protection of the Endangered Species Act.

Soon after the Deepwater Horizon oil spill, the Center leapt into action to fight dangerous offshore oil drilling that threatens the survival of the dwarf seahorse and countless other animal and plant species. A year later, with pollution still persisting in the Gulf and the seahorse in dangerous decline, we filed a scientific petition to federally protect the species. In 2012, the National Marine Fisheries Service announced that the dwarf seahorse may warrant protection.

Seahorses' unique life-history characteristics and habitat specificity make them particularly vulnerable when faced with exploitation and habitat degradation. Seahorses have elaborate social and reproductive behaviors, with males giving live birth and partners forming monogamous bonds that are reinforced each morning with a greeting ritual. The imperiled dwarf seahorse is too special to abandon to extinction.

MEDIA
Press releases
Search our newsroom for the dwarf seahorse

VIDEO: "DWARF SEAHORSE SNATCHES A COPEPOD"
Check out this up-close-and-personal video showing how these tiny seahorses can be deadlier than sharks.