GIVE TODAY
Pupfish are sometimes mistaken for minnows, but unlike minnows, they have small mouths lined with teeth. 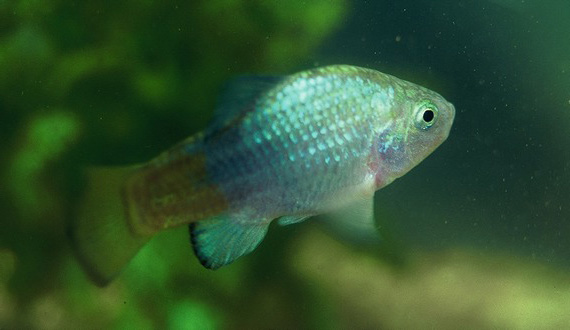 DESCRIPTION: The desert pupfish is a small, silver-colored fish with dark vertical bars on its sides. It has a short, compressed head, an upturned mouth, a thick, chubby body, and rounded fins. Males are larger than females, and they sport an iridescent blue color and yellow-orange fins during the mating season. Females and young pupfish have tan to olive-colored backs and silvery sides. Adults rarely grow longer than three inches.

HABITAT: Desert pupfish are adapted to desert environments and have been reported to survive water temperatures in excess of 110 degrees Fahrenheit, extremely low oxygen levels, salinity levels more than twice that of the ocean, and daily temperature fluctuations of up to 45 degrees. Desert pupfish are often associated with soft channel bottoms and clear water.

RANGE: Once common in shallow desert springs, cienegas, and small tributary streams of the lower Gila and Colorado River drainages in Arizona, California, and Mexico, the desert pupfish has been extirpated from most of its historical range. Today it is restricted to San Felipe Creek and its associated California wetland, San Sebastian Marsh, and to Quitobaquito Spring within Arizona's Organ Pipe National Monument. Small populations of questionable viability also exist within Salt Creek, irrigation drains around the Salton Sea, and the Río Sonoyta.

MIGRATION: This fish is nonmigratory.

BREEDING: Desert pupfish develop rapidly and may produce up to three generations per year. Throughout the spring and summer months, males aggressively defend a small spawning and feeding territory. Female pupfish can lay anywhere from 50 to more than 800 eggs in a season. Within a few hours of hatching, young begin to feed on small plants and animals. They reach full maturity within three months.

LIFE CYCLE: Desert pupfish can live from less than a year to a maximum of three years.

FEEDING: Opportunistic omnivores, desert pupfish consume whatever types of algae, plants, invertebrates, and detritus are available. They are known to eat midge and mosquito larvae. Desert pupfish have been observed digging pits in search of food.

POPULATION TREND: Desert pupfish populations occupying stable springs and headwater habitats persisted for millennia and experienced relatively little long-term change in numbers. Though desert pupfish are extremely hardy, they are unable to tolerate recent competition or predation from exotic fishes and other looming threats. Five natural populations in a dozen locations continue to occur in the United States.