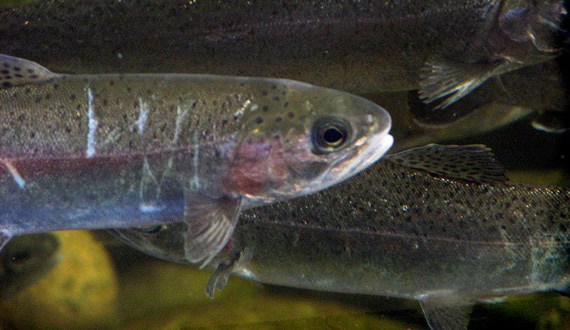 Steelhead are a unique form of rainbow trout. Like salmon, they spend most of their adult lives in the ocean but spawn and rear in freshwater streams and rivers. Streams along the central California coast and in the San Francisco Bay Area may support both winter-run anadromous steelhead and resident rainbow trout forms. Their diverse life histories have allowed steelhead to adapt to changing environmental conditions for millennia, but they haven't been able to withstand habitat losses from water diversions, dams, and urban development.

After central coast steelhead were listed as threatened in 1997, the Center and a coalition of fishing and environmental groups worked to improve protections for these fish. The National Marine Fisheries Service ignored its duty to designate critical habitat or issue protective regulations, so we and allies filed a lawsuit resulting in critical habitat protections and regulations preventing illegal “take” of central coast steelhead. But critical habitat protections were withdrawn in 2002 when the Bush administration refused to defend the Fisheries Service against a lawsuit brought by the National Association of Home Builders. The Fisheries Service agreed to consider re-establishing habitat protections after another lawsuit by a coalition of groups, including the Center. However, the final critical habitat areas designated in 2005 were significantly reduced and excluded important riparian habitat, streams that don't currently have steelhead, and areas above dams. The final steelhead listing excluded resident rainbow trout and steelhead trout landlocked above dams from the listed populations, even though these fish are an important genetic component for maintaining and restoring steelhead runs.

Fortunately, in early 2010 the Center won a victory for the trout when, thanks to a notice of intent to sue, the California State Water Resources Control Board announced it would move forward to protect imperiled fish in the Russian River watershed from water diversions by vineyards. In 2011, we've been attending meetings to stop a water grab by a private rancher from the Big Sur River, one of the steelhead's last viable runs. The Center has also worked closely with Bay Area and central-coast watershed groups to protect and restore steelhead trout, helping the Alameda Creek Alliance to revive a steelhead run in Alameda Creek, assisting the Salmon Protection and Watershed Network in protecting riparian corridors in Lagunitas Creek, and joining the Coastside Habitat Coalition in advocating for coastal San Mateo County streams.