GIVE TODAY
Virgin spinedace are primarily insectivorous, feeding on a wide range of insects, plant material and organic debris. 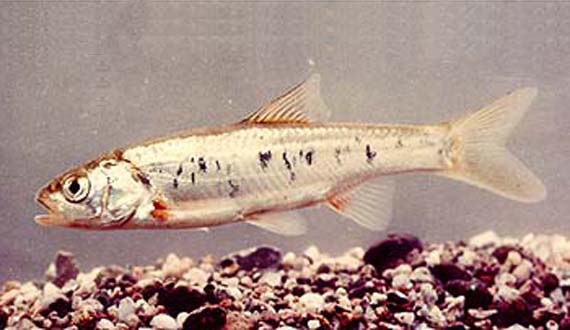 The Virgin River spinedace is a medium-sized, silvery minnow that was once common throughout the Virgin River basin in northwestern Arizona, southeastern Nevada and southwestern Utah. The fin on its back has eight rays, and the first two of them are hard, spiny and weakly fused, which gives the spinedace its name.

Overuse, drought and climate change are causing a growing water shortage in the Virgin basin, which has caused the loss of the spinedace from more than half of its historic range. Remnant populations are isolated from each other by dry reaches of the river. In places, every single drop of water is taken out of the Virgin River for human use. Saving the spinedace will require returning natural flow levels to the river. But rather than taking long-term conservation measures, the Washington County Water Conservancy District is putting the river's tributaries into pipes that will further deprive the river and fuel more unsustainable development and human population growth.

There are only four species in the spinedace genus. One of them, the Pahranagat spinedace, is extinct; the other three are at risk of extinction. From 1900 to 2010, freshwater fish species in North America went extinct at a rate 877 times faster than the natural background extinction rate. Based on the fossil record, one freshwater fish species goes extinct every 3 million years, but North America lost 39 species and 18 subspecies to extinction between 1898 and 2006. Freshwater fish in the Southwest are extremely vulnerable to extinction under the onslaught of increasing water shortage, human population growth, drought and climate change. The Center is working across the country to protect freshwater animals and the water they need to survive.