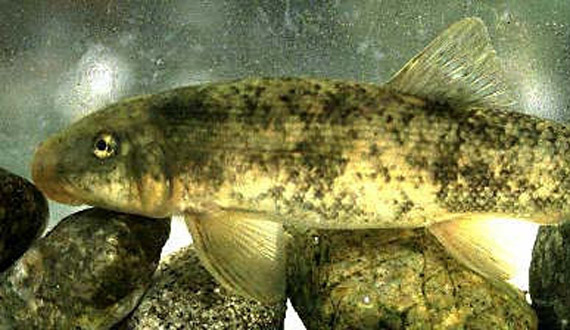 HABITAT: Santa Ana suckers live in the shallow portions of rivers and streams. These fish exist in flashy systems where currents range from swift in the canyons to sluggish in the bottomlands. During times of deluge and flooding, the suckers seek refuge in backwater eddies and other less turbulent areas. Once flooding lessens, they move back into the mainstem of these mostly-quiet rivers. Preferred substrates are generally coarse and consist of gravel, rubble, and boulders with growths of algae.

RANGE: The Santa Ana sucker is native to the Los Angeles and Santa Ana basins in southern California. Today it is restricted to three geographically separate populations in three different stream systems: the lower and middle Santa Ana River; east, west, and north forks of the San Gabriel River; and the lower Big Tujunga Creek. A population also occurs in the Santa Clara River.

MIGRATION: The species is a nonmigrant.

BREEDING: Santa Ana suckers become sexually mature during their first year and are known to be explosive breeders, producing between 4,400 and 16,000 eggs at a time. It is believed that their fecundity has evolved for the purpose of repopulating streams after major flood events. Spawning peaks between late May and early June, and eggs hatch within 15 days of fertilization.

LIFE CYCLE: Santa Ana suckers are short-lived fish, with few living to four years and most only living for one or two.

THREATS: Urbanization and water extraction are the foremost threats to the Santa Ana sucker. The four river systems that are home to this fish all flow through the expanding urban sprawl of the greater Los Angeles area, including Orange County and western Riverside County. This habitat is increasingly subject to dams, diversions, pollution, channelization, and poor watershed management. Recent studies indicate that a plasticizer found in the Santa Ana River may be affecting the reproductive capacity of the Santa Ana sucker.

POPULATION TREND: During the 1970s, the Santa Ana sucker was described as common. Since then, the species has lost close to 95 percent of its historic habitat.