GIVE TODAY
The cutthroat trout is named for the distinctive red coloring behind its gills. 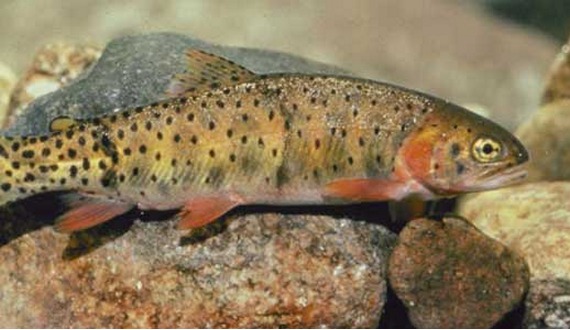 Despite its gruesome moniker, the Colorado River cutthroat trout has long been revered as one of North America's most beautiful native fish — and it's now one of the country's most imperiled. Named for the distinctive red coloring behind its gills, the cutthroat has also been known as the mountain trout or speckled trout, thanks to its alpine stream habitat and distinctive black spots. Once plentiful throughout the upper Colorado River drainage, today the cutthroat is found in less than 5 percent of its original range, with only 1 percent of the population composed of non-hybridized fish.

Despite its highly imperiled status, federal officials have refused to grant meaningful protections for the cutthroat. The Center originally petitioned to have the fish listed as endangered in 1999, suing after the petition was ignored and later to overturn a denial of our petition in 2004. In 2007, the  U.S. Fish and Wildlife again decided not to list the cutthroat — part of a series of controversial and ultimately illegal Bush administration policies. We sued yet again in November 2009 to challenge the unlawful 2007 ruling.

Cutthroat trout are under siege from a number of threats; the most serious are habitat loss and degradation, caused by dams, livestock grazing, roads, logging, mining, water withdrawal, and increasingly, climate change. Like all trout, Colorado River cutthroats require cold, clear, unobstructed water – a more and more scarce commodity. The cutthroat is also threatened by competition and hybridization with nonnative fish, as well as parasitic infections. With population numbers and available habitat so badly depleted, the cutthroat is on the verge of extinction.