GIVE TODAY
A flock of passenger pigeons reported in Ontario in 1866 was described as being a mile wide and 300 miles long and taking 14 hours to pass overhead. 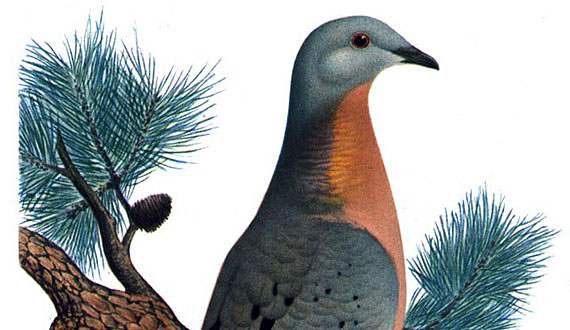 The noble passenger pigeon's common name comes from the French term pigeon de passage, referring to the massive migrations of these birds across the sky.

A flock of passenger pigeons reported in Ontario in 1866 was described as being a mile wide and 300 miles long and taking 14 hours to pass overhead.

And though their species enjoyed a long, long life before they met up with modern homo sapiens, that contact was all too brief. These remarkable birds, with their iridescent wings, fiery-red feet, sparking scarlet eyes and unmistakably deafening calls, passed from the Earth 99 years ago.

In the 19th century, the passenger pigeon may have been the most abundant bird in the entire world, with a population believed to have approached 4 billion individuals. As they rested in their forest habitat, roosting flocks overburdened strong trees to such an extent that some birds had to settle upon their flockmates' backs to get some sleep — and thick branches were known to snap under the birds' weight.

Flocks in flight were a spectacle without parallel, enormous masses of birds taking on multiple shapes as they twisted and undulated across the firmament. Famed naturalist John James Audubon described these flocks delightfully — and dramatically — as blackening the skies “as by an eclipse.”

One of the most social land birds, the passenger pigeon also displayed unique, charming behaviors, living in colonies stretching over hundreds of square miles, practicing communal breeding, and adept at following a lead pigeon when flying en masse, with flocks almost magically swerving in unison to avoid predators. (In fact these birds should be remembered for their anti-violence stance, since they almost never physically fought with other creatures.)

The exact causes of the passenger pigeon's extinction are unclear, but massive hunting and persecution were among the most devastating impacts, since the bird was very poorly adapted to escape people. It relied on large numbers, rather than hiding or fleeing, to avoid predation. Its other fatal peril was habitat destruction for agriculture and other development, as humans razed the millions of acres of hardwood forests the birds needed for food and shelter.

No Center Endangered Species Act petition, no litigation or activism or any other strategy can ever bring back this vanished form of life. But by honoring its memory and its heartbreaking extinction, we hope to send a message: Please fight with us to stop the  cascade of extinctions now killing off animals and plants around the world. Together we can prevent the winking out of our wild creatures be they great or small.