GIVE TODAY
The 1967 listing of the bald eagle as an endangered species was a major impetus for the EPA to ban most outdoor uses of the pesticide DDT in 1972. 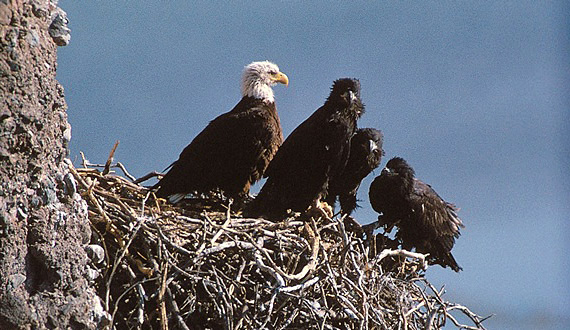 DESCRIPTION: Female bald eagles can weigh up to 14 pounds and have wingspans of eight feet. Males weigh up to 10 pounds, with wingspans of six feet. Both sexes have brown bodies and acquire their white heads and tail feathers in their sixth year. Unlike golden eagles, they have unfeathered legs.

HABITAT: Bald eagles live within two and a half miles of the coast, bays, rivers, lakes, or other bodies of water, reflecting the availability of their main food source. They typically nest in large, mature, accessible trees, as well as cliffs and man-made structures. They often congregate in select wintering areas.

MIGRATION: Bald eagle migration is partial. With available water and food resources, the species will occupy a territory year-round. However, many eagles will migrate south or to the coasts in the winter in search of food.

BREEDING: Bald eagles sexually mature at four or five years and often return to the area where they were born to find a mate and nest. Nests can be as large as eight feet across and weigh up to a ton. Clutches are one to three eggs per year. Incubation lasts for 35 days and brooding for four weeks until young are pushed out of the nest. The birds mate for life.

LIFE CYCLE: Individuals can live 20 to 30 years in the wild.

POPULATION TREND: A quarter- to a half-million bald eagles lived on the continent at the time of European arrival; this was reduced to 416 pairs by 1963 in the lower 48 states, and the species was entirely extirpated from many states. The nationwide population was estimated at 5,748 pairs at the time its delisting was proposed in 1999, and by 2007, breeding pairs had climbed to 11,040.