GIVE TODAY
The average weight of the Rota bridle white-eye is only about a third of an ounce. 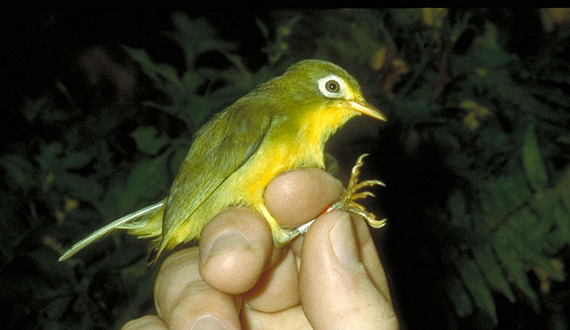 DESCRIPTION: The Rota bridled white-eye was given its name because of a white ring of feathers that circle both its eyes. The bridled white-eye's plumage is otherwise yellow, and each bird has a yellowish-orange bill, legs, and feet. Rota bridled white-eyes are considered gregarious and are often observed in small groups. Little is known about their food habits, but it is presumed that they forage on the fruits of the amahadyan and pengua trees and feed on the nectar of avocado, ahgao, and atoto trees.

HABITAT: Little is known about the habitat needs of the Rota bridled white-eye. Birds have been observed at elevations above 490 feet containing a midstory canopy layer, high epiphytic plant volume, and yoga, oschal, faniuk, kafu, and ahgao trees as dominant forest components. The majority of Rota bridled white-eye sightings have been recorded in limestone forest.

RANGE: This species is known from the Sabana region of Rota.

LIFE CYCLE: The Rota bridled white-eye breeds from at least December through August, laying eggs in a cup-like nest. Females typically lay one to two eggs per clutch, but they are capable of laying three. Both males and females incubate, brood, and feed nestlings; the bird has been observed incubating and nestling for periods of approximately 10 to 12 days each.

THREATS: This bird is threatened by habitat loss; habitat degradation; predation by rats, other birds such as black drongos, and the brown tree snake; and the possibility of its single, small population being wiped out by a random catastrophic event such as a typhoon or avian disease.

POPULATION TREND: The population was estimated at 10,000 in 1982. That number dropped dramatically in subsequent years, and by 1999, the population was down to 1,000 birds. The Fish and Wildlife Service is currently undergoing a five-year status review of the species.