GIVE TODAY
The Bicknell's thrush uses a unique and ingenious breeding system among birds: Both sexes mate with multiple partners in a season. 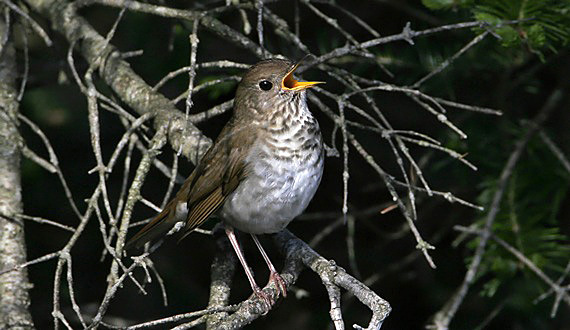 The Bicknell's thrush uses a unique and ingenious breeding system among birds: Both sexes mate with multiple partners in a season — resulting in egg clutches fathered by several different males. This system is handy for birds with limited food availability because the father birds supply the food, and with multiple fathers bringing home the bacon, each chick is more likely to get its fill. Unfortunately, clever breeding habits can get the Bicknell's thrush only so far in the modern world, where food and habitat availability are stretched thinner than ever thanks to development, logging, pollution and now perhaps the scariest threat of all: climate change. In the coming decades, warming temperatures are projected to change and shrink the bird's little remaining habitat, notably by facilitating the decline of the high-elevation coniferous forests it depends on for breeding.

To help save the Bicknell's thrush from climate change and other threats to its long- and short-term survival, in 2010 the Center filed a scientific petition to list the species under the Endangered Species Act. In 2011 we reached a landmark agreement with the Fish and Wildlife Service compelling the agency to move forward on protection decisions for 757 species, including the Bicknell's thrush, whose initial protection decision is due in 2013. In response to our petition and that agreement, in 2012 the Fish and Wildlife Service announced a “90-day finding” that the Bicknell's thrush may warrant protection as an endangered species, and in 2013 it agreed to finalize a decision within four years. Unfortunately, despite its continuing peril, in 2017 the Trump administration decided not to protect the species.

This rare, mountaintop-dwelling bird has one of the smallest populations of any migratory songbird in North America and will likely lose half its habitat to climate change, according to a 2017 study by the Vermont Center for Ecostudies.The Center won't give up fighting to save the Bickcnell's thrush from extinction.

MEDIA
Press releases
Search our newsroom for the Bicknell's thrush