GIVE TODAY
Male Oregon spotted frogs can make a noise like a series of low clicks while floating on water's surface and underwater. 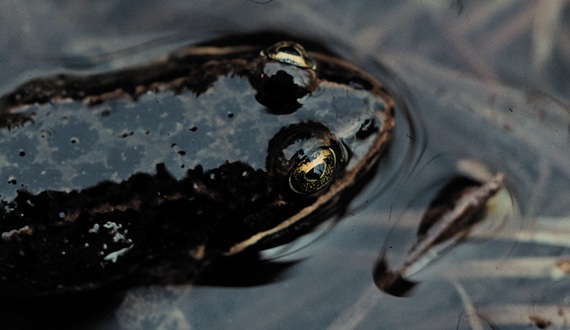 DESCRIPTION: The Oregon spotted frog is two to three inches long and has short legs, upturned eyes, and a brown to reddish-brown head and back, which become increasingly red with age.

RANGE: The historic distribution of the species extended from the extreme southwest corner of British Columbia to the northeast corner of California. Currently, the species occurs in extremely low numbers within a very restricted range.

MIGRATION: This frog is nonmigratory.

BREEDING: The frog's breeding cycle is related to ice melt on lakes, ponds, and marshes and lasts from early February through April, depending on the population's elevation. Eggs are laid in spherical clusters in shallow, permanent water, where they float freely, often protruding above the water's surface. This may result in mortality due to freezing and desiccation.

LIFE CYCLE: Oregon spotted frogs gather in breeding ponds in early spring. Females lay egg masses communally. The tadpoles metamorphose after about four months, and take two or three years to reach breeding age. Like most frogs, Oregon spotted frogs do not guard or feed their young. Their lifespan is unknown, but is probably not more than four or five years.

FEEDING: Adult Oregon spotted frogs are grazers, and eat mostly invertebrates such as beetles, flies, spiders, and water striders. They also eat algae, decaying plant matter, and detritus. They are "sit-and-wait" predators, remaining motionless in the water or on the shore until something tasty wanders by. The frogs then lunge toward the prey and capture it with a sticky tongue. They have also been reported to eat juvenile frogs of other species.

THREATS: The destruction and degradation of wetlands resulting from human activities has led to a number of threats to the frog. These include limited suitable breeding habitat and the isolation of existing populations from each other. The introduction of nonnative predators such as bullfrogs, bass, and other predatory freshwater fish species is also believed to contribute to their decline.

POPULATION TREND: The population of the Oregon spotted frog has dramatically declined in the past 50 years. It is presumed extirpated in its former range in California, and is nearing extinction in British Columbia.

Photo by Kelly McAllister, Washington Dept. of Fish
and Wildlife