Marine fish provide 15 percent of all animal protein consumed by humans. Under this intense pressure — 15 percent of 7.5 billion people (and growing), every year, year in, year out — global fisheries are collapsing.

A vast amount of the discarded waste of 7.5 billion consumers also finds its way to the oceans.

A 2009 assessment of the state of commercial fisheries around the world found that 80 percent of fish stocks are either fully exploited, overexploited, or have collapsed [1]. Though a catch reduction of 20 to 50 percent is needed to make global fisheries sustainable, the demand for fish is expected to increase by 35 million tons by 2030 due to increased consumption and a “rapidly increasing human population.” The authors of the analysis warn that both biological diversity and human food security are at great risk.

In the United States, catch of Atlantic bluefin tuna plummeted by 99 percent between 1963 and 2006 [2]. Atlantic cod declined by 89 percent between 1980 and 2006 [2]. And black grouper, which are fished during spawning and often taken before they are able to successfully reproduce, declined by 82 percent [3]. Many commercially fished species have been placed on the International Union for the Conservation of Nature’s list of threatened species, including southern bluefin tuna, yellowtail flounder, Atlantic halibut, abalone, sturgeon, and several sharks. Overall, 90 percent of the world’s large predatory fish are in decline [4].

As the human population grows, the rate of extinction is accelerating. Of the 21 marine species known to have been driven extinct in the past 300 years, 16 disappeared since 1972 [5]. The global fish crisis has become so severe, scientists and wildlife managers are breaking the human population taboo, calling not only for reduced consumption and better regulation, but for alleviation of poverty and “stabilization of the world’s human population” [1]. 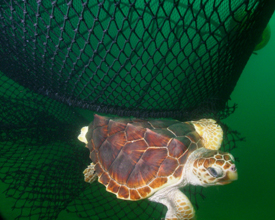 Compounding the problem of overfishing, millions of other animals are accidentally killed — and thrown away — as commercial fishing "bycatch". An astounding 20 million tons of birds, fish, marine mammals, and sea turtles are accidentally caught in fishing nets, longlines, and drift-gillnets each year [5]. Bycatch, by itself, has reduced hammerhead sharks in the Northeast Atlantic by 89 percent in recent decades.

For some species, bycatch and competition for food sources may spell extinction. Hundreds of thousands of endangered sea turtles are entangled each year, tens of thousands of which die before they can be released. For species such as sea turtles that are long-lived and slow to reproduce, the dramatic increase in mortality due to commercial fishing bycatch is devastating. Six of seven species of sea turtles are now endangered, three of them critically endangered.

Our important ocean ecosystem is suffering on multiple fronts. In addition to overfishing impacts from commercial fishing, coral reefs — anchors of biodiversity that support thousands of fish species and as many as a million species overall — are often damaged or destroyed by trawlers and dredging. Many commercial-fishing operations of the developed world, having overexploited fisheries in their own waters, are now moving to exploit fisheries in the developed world to maintain unsustainable catch levels. More than half of the world’s mangrove forests, which nurture many species in coastal waters, have been transformed or destroyed, much of it converted to commercial aquaculture. [6]

The demand of an unsustainable human population for large-scale terrestrial food production also affects the oceans in devastating ways. Runoff laced with massive chemical fertilizer applications by commercial-agriculture operations flows to the sea and creates large “dead zones” where it spreads out into the ocean, areas that are depleted of oxygen and virtually devoid of aquatic life. Scientists have been aware of the dead zone at the mouth of the Mississippi River since the 1970s. It varies in size from year to year, but has been measured at more than 20,000 square kilometers in recent years. [7]

A vast amount of the discarded waste of 6.8 billion consumers also finds its way to the oceans. Estimates are that 80 percent of the garbage clogging the seas originates on land. In the North Pacific Gyre, an area largely free of ocean currents where floating debris tends to collect, the Great Pacific Garbage Patch has formed. Millions of tons of plastic are trapped there, swirling around an area at least twice the size of Texas and possibly twice the size of the entire continental United States. Recent research indicates that the ratio of plastic to plankton in the waters of the gyre may be as high as 46:1, threatening starvation to fish and marine birds and mammals that mistakenly ingest tiny pellets of plastic that resemble food. [8]

Better fisheries management and new technologies can help some species rebound, but in the long run, much of this progress will be undermined if the human population, and its voracious appetite, keep growing unsustainably.