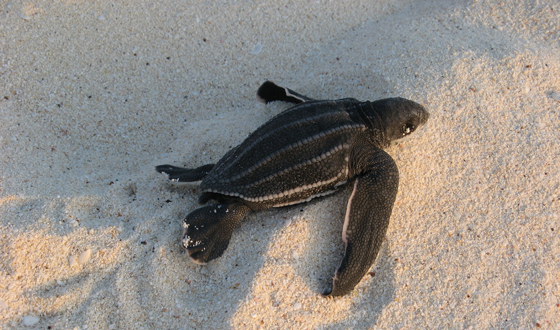 As ancient as the dinosaurs, the leatherback sea turtle is something of a dinosaur itself — and the heaviest reptile on the planet. This champion swimmer, whose diving capabilities are unmatched by other turtles, has confounded scientists with its mammal-like ability to regulate its own body temperature. Tolerant even of the extreme temperatures of the Arctic Circle, leatherbacks can't endure humanity's assault on the world's oceans much longer.

The biggest threat to loggerheads is entanglement in fishing gear. Ocean-borne longline fishing vessels targeting swordfish and tuna deploy thousands of baited hooks on lines that can extend for more than 60 miles. These hooks catch and kill not just swordfish and tuna but thousands of sea turtles, seabirds, marine mammals and sharks. Gillnet fisheries likewise entangle and drown many of these species, including leatherbacks, and California's Dungeness crab fishery has been killing turtles in the Pacific.

The Center has been going to court to defend loggerhead sea turtles from deadly fishing-gear entanglements off the U.S. West and East coasts, as well as off Hawaii, for more than 20 years. After our 2017 lawsuit, California agreed in 2019 to evaluate the risk of leatherback entanglement when deciding whether to open and close its Dungeness crab fishery. That same year we also won a suit challenging federal longline fishing permits issued for vessels off the West Coast. In 2020 California proposed a rule to reduce the number of endangered sea turtles and whales entangled in this gear.

Following another Center lawsuit, longline fishing for swordfish was prohibited along the West Coast. We've had many other successes against dangerous fisheries over the decades, like in Hawaii, but we still step in wherever we're needed.


While leatherbacks are threatened throughout their range — including from sea-level rise, ocean acidification, and plastic pollution — they're particularly imperiled in the Pacific Ocean. In 2007 we filed a petition to obtain critical habitat designation for leatherbacks in their foraging grounds off the northwest coast. After we twice sued to compel a response from the National Marine Fisheries Service, in 2012 the agency granted the turtle 40,000 square miles of critical habitat off California, Oregon and Washington — the first critical habitat for leatherbacks designated in continental U.S. waters and the largest area set aside to protect sea turtle habitat in the United States or its territories.

The year 2020 brought good and bad news for these creatures. First a federal review of leatherback science concluded that all seven populations face a high extinction risk. So we're happy that weeks after this announcement, in response to a petition from the Center and Turtle Island Restoration Network, the California Fish and Game Commission voted 5-0 to advance leatherbacks to candidacy under the state’s Endangered Species Act, giving them some protections. Finally, in 2021 the California Department of Fish and Wildlife recommended protecting leatherback sea turtles as endangered under the state’s Endangered Species Act.