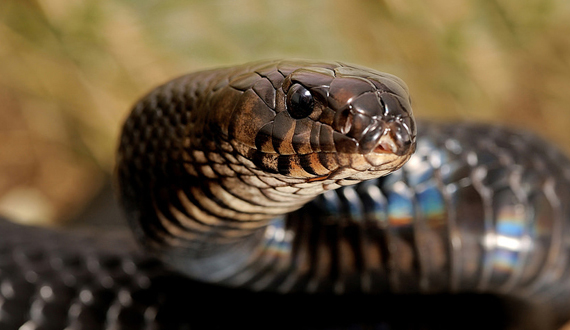 The docile, nonvenomous eastern indigo snake is known for its lustrous, blue-black body; the reddish-orange hue on its chin, throat and cheeks; and its large size, as long as 7 feet from nose to tail, which makes it the longest native snake in the United States. It lives in Florida, south Georgia, Alabama and Mississippi, preferring mature longleaf-pine habitat, where it seeks out gopher tortoise burrows for shelter and nesting. However, it has been found in a variety of other habitats, including mangroves, hollowed-out root channels, hollow logs, and burrows created by other wildlife (besides gopher tortoises). Fascinatingly, isolated or “virgin” female eastern indigos have demonstrated the ability to lay fertile eggs.

The U.S. Fish and Wildlife Service listed the eastern indigo snake as threatened under the Endangered Species Act in 1978 due to dramatic population declines caused by habitat loss, overcollection for the pet trade, and mortalities caused by toxic chemicals commonly used to catch rattlesnakes.

Today the main threats to eastern indigos are habitat destruction and degradation, as urban development creeps more and more into natural areas. Because a single eastern indigo snake can inhabit a territory as large as 805 acres, these snakes need a lot of natural habitat, unfragmented by development and roads. But it's estimated that they lose more than 5 percent of their habitat every year in Florida alone — so as human populations increase and development continues this species could be left without a home.

In 2016 scientists discovered that what many people had been calling “the eastern indigo snake” is actually two physically and genetically distinct species: the eastern indigo snake (Drymarchon couperi), found near the Atlantic Coast, and the Gulf Coast indigo snake (Drymarchon kolpobasileus), found along the coast of the Gulf of Mexico and into South Florida. Since these species' populations are subsets of the pre-2016 “eastern indigo,” their populations are smaller — meaning each is even rarer than previously considered. The Center is working to ensure the Service accounts for this newly described species split when it makes conservation decisions for these rare snakes. We also work to protect indigo snakes and their rare longleaf pine habitat in the Southeast by fighting ill-advised projects that disturb their natural behaviors or threaten large swaths of their habitat.