This lizard is found only in its characteristic dune terrain partially stabilized by shinnery oak, bluestem grasses, yucca and other plant species. 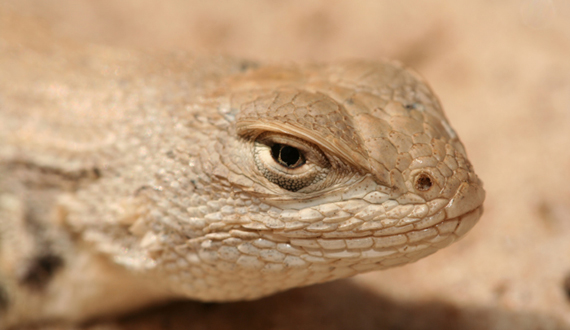 Appearances can be deceiving. At first glance, you'd never think the rolling white sand dunes of southeastern New Mexico and west Texas held the largest stand of oak in the country. The region's shinnery oaks are only four or five feet high, but they provide food, shade and a breeding ground for the small, brown dunes sagebrush lizard — otherwise known as the sand dune lizard. Under the shade of these oak trees, the dunes sagebrush lizard buries itself in the cool, white sand, avoiding predators and regulating its body temperature. But when it comes to oil and gas development and livestock grazing, there's nowhere for the lizard to hide.

Controlled studies have found that relatively small numbers of oil and gas wells have dramatically lowered dunes sagebrush lizard populations. With oil and gas development rapidly increasing on federal lands, these lizards have suffered dramatically. Their habitat loss is compounded by efforts of ranchers to remove shinnery oak — which is toxic to cattle — by using an herbicide spray.

Refusing to let the dunes sagebrush lizard be another casualty of cattle grazing energy policy, the Center petitioned for the animal to be listed under the Endangered Species Act in 2002. The U.S. Fish and Wildlife Service made the it a "candidate" for listing, thereby avoiding a grant of full protection. Finally, at the end of 2010, the Service proposed to list the dunes sagebrush lizard as endangered. But the next year Rep. Steve Pearce (R-N.M.) began to spread baseless claims that protecting the lizard would have a detrimental effect on New Mexico's oil and gas jobs — so the Center debunked that misinformation in a report. After the Fish and Wildlife Service decided to cancel its proposal to protect the lizard, we and allies sued in 2013.

Check out our press releases to learn more about the Center's actions for dunes sagebrush lizards.