When a desert tortoise is handled or bothered, it may empty its bladder as a defense behavior, and the sudden loss of water may imperil its life. 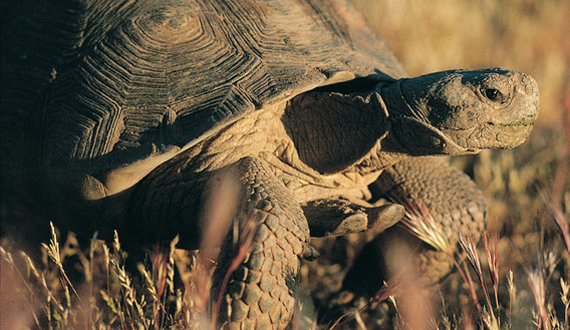 Desert tortoises have lived in the deserts of California, Arizona, Nevada and Utah since the Pleistocene. In the early years of the 20th century, they still thrived within the Southwest's arid landscapes: As many as 1,000 tortoises per square mile once inhabited the Mojave. But by the end of last century, this population of the desert tortoise was listed as a threatened species under the Endangered Species Act. Livestock grazing and urban development, along with the ever-increasing use of off-road vehicles, continue to degrade the tortoise's vanishing habitat, while Army translocation projects threaten to devastate the Mojave population.

The Center has been working for the Mojave desert tortoise since 1997. Challenging the Bureau of Land Management's grazing practices on arid public lands, we've helped protect millions of acres of fragile tortoise habitat. We've actively sought to limit off-road vehicle use throughout the desert tortoise's range, including appealing the opening of two illegal off-road vehicle routes in Kern County, California. In 2000 we made significant gains for the desert tortoise when, as a result of our legal efforts, the Bureau permanently cancelled all livestock grazing on 276,125 acres of the Granite Mountains Grazing Allotment. In 2002 we and allies won another landmark settlement in which 1.9 million acres of the California Desert Conservation Area were protected against livestock grazing and 18,000 acres of tortoise habitat were closed to off-road vehicle access. Later we called on the U.S. inspector general to investigate the role of political meddling in the tortoise's badly revised draft recovery plan and went to court to prevent a California mine expansion from affecting 178 acres of tortoise habitat.

Thanks to a lawsuit filed by the Center and our allies at Desert Survivors, in 2008 Fort Irwin officials suspended a disastrous desert tortoise translocation project that killed hundreds of the animals as part of “mitigation” for expanding the military base into tortoise habitat. The Army and Bureau of Land Management proposed a new translocation project in 2009 — but after tens of thousands of letters from Center supporters, the Bureau halted the project.

Since then we've taken dozens more actions to protect the desert tortoise and its habitat from housing developments, off-road vehicles, oil and gas development, grazing and much more. We won't let this ancient reptile go the way of the dinosaurs.