GIVE TODAY
The Iliamna Lake seals of Alaska are the only freshwater seals in the United States. 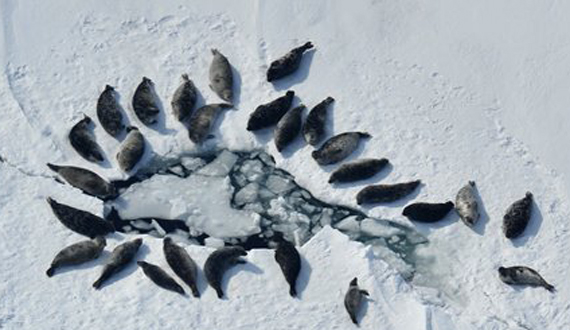 Exclusively in Iliamna Lake, Alaska’s largest body of freshwater, lives a small population of rare freshwater seals — one of only two freshwater harbor seal populations in the world. Alaska natives, who have hunted Iliamna Lake seals for centuries, describe the seals as fatter, larger and darker in color than their saltwater neighbors, with a unique fur pattern. Given Iliamna Lake seals’ separation from other harbor seal populations and singular ecological niche — they constitute a “distinct population segment” of eastern North Pacific harbor seals — these are animals that urgently need protection under the Endangered Species Act.

The Pebble Mine, a massive copper and gold mine proposed for the Iliamna Lake area, threatens to contaminate the lake’s pristine waters and devastate seasonal salmon runs upon which the seals rely. Mine operations would include year-round use of an icebreaker ferry, which would destroy lake ice relied upon by seals during the winter and run immediately adjacent to critical haul-out, pupping and fishing areas. Disturbance from vehicles and increased human presence also would disturb this remote seal population.

Climate change is already affecting Iliamna Lake seals and their freshwater and anadromous prey through warmer temperatures, greater water flows, and increased siltation in streams and rivers. Warmer temperatures also mean less lake ice, which reduces the quality of overwintering habitat for the seals. In addition, climate change is facilitating the spread of diseases like distemper, which could decimate the Iliamna Lake seal in the event of an outbreak.

Iliamna Lake's clear, pristine waters provide this freshwater seal with its only home. To protect these seals from threats — including the imminent local threat of Pebble Mine and the overarching threat multiplier of climate change — the Center for Biological Diversity filed a petition in February 2020 asking the federal government to protect the Iliamna Lake seal as threatened or endangered under the Endangered Species Act. A previous petition filed in 2012 was denied, but new science makes the case for the seal’s protection stronger than ever.