Manatees are the only vegetarian marine mammals. 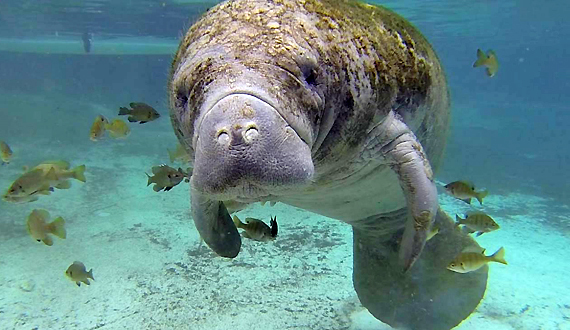 Gentle and playful marine mammals, Florida manatees have come to represent the amazing biodiversity of Florida. With their large size, slow-moving nature, and fondness of seagrass, it's easy to see why they're nicknamed “sea cows.” They’ve long been fascinating to humans, inspiring tales of mermaids among sailors of yore. But popularity can’t protect manatees from slipping toward extinction.

Originally listed as endangered under the Endangered Species Act in 1973, manatees have never truly recovered, as they must contend with a barrage of human threats.

Boats are responsible for about 20% of human-caused manatee deaths, making them the greatest sources of human-caused mortality. Meanwhile boating in Florida is at an all-time high and increasing. A Center report found that the government's fast-track authorization of watercraft-access projects without analyzing their collective impacts is likely a key factor behind the boat strikes that are still the leading killer of manatees. Collisions with boats are, on average, annually responsible for 20% of manatee deaths.

Climate change is also a threat. Cold snaps caused by unusual water-temperature fluctuations are killing manatees, while higher surface-water temperatures contribute to more severe hurricanes and lethal algal blooms. All these, combined with loss of habitat and food sources due to urban development, add up to bleak long-term prospects for manatees’ future.

In 2009 the Center petitioned the U.S. Fish and Wildlife Service, which agreed  that the manatee’s four-decade-old critical habitat designation badly needed an update — but never actually made a new designation. In fact, when the Service finally did act in 2017, it downlisted the manatee from “endangered” to “threatened” even though 2016 had been the deadliest-ever year for manatees.

Fortunately in 2020 a Center lawsuit resulted in a federal judge requiring the U.S. Army Corps of Engineers to consult with the Fish and Wildlife Service on the Corps’ discharges from Lake Okeechobee, which likely influence harmful algal blooms harming wildlife like manatees.

The Center has sued many times on behalf of the manatee — to maintain Endangered Species Act protections, to force federal updates of population assessments to guide manatee management decisions, and to protect manatees from harmful algal blooms. We'll keep working to earn greater protections for these giant gray “mermaids.”

MEDIA
Press releases
Search our newsroom for the Florida manatee

Center report: Collision Course
Collisions with watercraft are a persistent and often deadly threat to endangered Florida manatees — yet our report shows the feds haven't truly been protecting them.