GIVE TODAY
The oceanic Hawaiian damselfly lives on the windward side of the Koolau Mountains, on the island of Oahu, Hawaii. 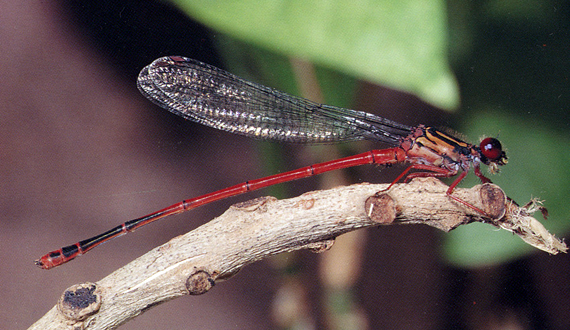 The beautiful oceanic Hawaiian damselfly is one of 23 damselfly species on the Hawaiian Islands, endemic to the island of Oahu. Damselflies begin life as an egg, soon hatching into a predacious naiad that stalks streambanks for other aquatic invertebrates or swims after small fish, and then molts into the mature form. In this last embodiment, the falcon-like damselfly swoops down on other flying insects such as midges. When the damselfly itself is disturbed, it takes refuge in the forest canopy overhanging the stream; when seized, it plays dead.

The oceanic Hawaiian damselfly is one of many Hawaiian animals suffering from lengthy bureaucratic listing delays. It was placed on the federal candidate list for Endangered Species Act protection in 1984. A quarter-century later it was still on the list, still unprotected, and sliding toward extinction.