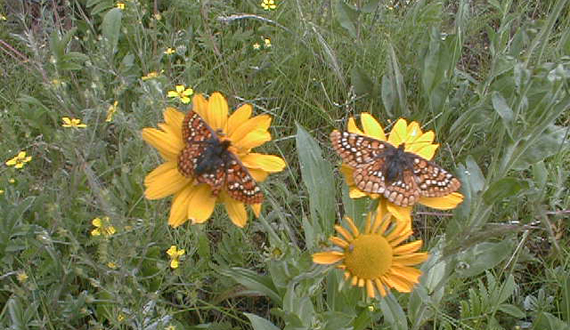 A year-round resident of New Mexico's high mountain meadows, the highly imperiled Sacramento Mountains checkerspot butterfly relies wholly on the integrity of its remarkably limited range. This stunning orange-and-black butterfly is found only in high-elevation meadows around the village of Cloudcroft, in the Lincoln National Forest in southern New Mexico.

The Sacramento Mountains checkerspot butterfly has been declining since the Forest Service began formal surveys in 1999. By 2012 the butterfly occupied half the number of monitored sites it had formerly occupied, and it has continued to decline precipitously. Today it is virtually undetected throughout its range, leading the Forest Service to conclude that it is likely the most endangered butterfly in the United States, with a non-trivial probability of imminent extinction.

Unfortunately the New Mexico Wildlife Conservation Act doesn't recognize insects as wildlife, so this butterfly is afforded no protections under state laws.

With the butterfly facing a number of impending threats, the Center first petitioned to list the species under the federal Endangered Species Act in 1999. Despite an initial finding that endangered status may be warranted, the U.S. Fish and Wildlife Service took no action on our petition. In response to a follow-up lawsuit we filed, the Service issued a proposal to guarantee the butterfly and its critical habitat full protection ... only to later withdraw it.

Nearly a decade after the initial petition, and with the Sacramento Mountains checkerspot butterfly still lacking federal protection, we filed another petition for federal protections, this one also requesting emergency protection from pesticide spraying planned for a majority of the butterfly's private-lands habitat. The spraying was delayed but not stopped, and our listing request was denied. Again, we filed suit against the Service for its negligence in failing to protect the species, and in 2008, we reached a settlement with the agency requiring it to make a finding on our petition later that year. In 2009 denied that petition, allowing threats to the butterfly to continue unabated.

The Sacramento Mountains checkerspot butterfly has continued to decline. In 2021 — with no caterpillars and only a handful of adults having been observed in the past three years — the Center petitioned for its Endangered Species Act protection once again.

Since we started petitioning for this species, we've also defended it in other ways, like by successfully appealing a proposal to sell important checkerspot butterfly habitat in the Lincoln National Forest to the town of Cloudcroft for development.