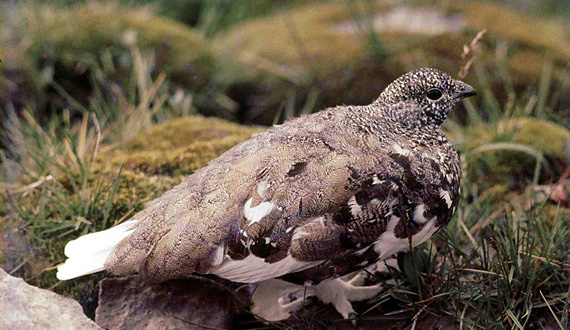 The smallest bird in the grouse family, the white-tailed ptarmigan is also one of the few animals that lives on alpine mountaintops throughout its entire life. Every part of this ptarmigan is adapted to help it thrive in a forbiddingly frigid climate, from its feathered, snowshoe-like talons to its seasonally changing plumage to its remarkable metabolic ability to gain body mass even throughout the harsh winters of its home. But on a planet with a warming climate, these same adaptations could spell the bird's doom: The ptarmigan's range is severely limited by its sole dependence on alpine habitat, which is shrinking as hotter temperatures sneak up the mountainsides, threatening to push the treeline — and the ptarmigan — to ever-higher elevations, until there's no more room to rise. And since the white-tailed ptarmigan is an “indicator species” for high-elevation ecosystems — the canary in the alpine — its path toward demise could signal the complete collapse of these ecosystems in the not-so-distant future. Other threats to the bird and its habitat, including recreation, mining and livestock grazing, make the species' danger all the greater.

To make sure the white-tailed ptarmigan's uniqueness doesn't leave it high and dry in the face of climate change — as well as other threats — in 2010 the Center filed a scientific petition to earn federal protection for the bird in the lower 48 states, where it's by far the most imperiled. Our petition asked the U.S. Fish and Wildlife Service to list either the entire continental U.S. population or the Rocky Mountains population as threatened under the Endangered Species Act, which should help spur strong regulations to protect its U.S. habitat (and by extension, the planet) from climate change. The next year, the Center reached a historic legal settlement with the Service mandating protection decisions for 757 species, including the white-tailed ptarmigan — and the next year, the agency announced the bird may warrant protection.